There are few places in the United States where wild ponies roam free. Fortunately for us, one of those locations is on the Eastern Shore. Nearby Chincoteague and Assateague Islands are famous for their wild ponies. These fascinating, feral inhabitants are a big draw to the area, and viewing them makes for a fantastic day trip from Cape Charles. To help plan your experience, we’ve answered several frequently asked questions regarding the barrier islands of Chincoteague and Assateague, how the ponies made the island their home, the famous Pony Penning and Pony Swim, and the best ways to safely view these incredible creatures.

Do wild ponies live on both Chincoteague and Assateague islands?

While the ponies are named after the town of Chincoteague, they actually live on Assateague Island, which is an undeveloped National Wildlife Refuge. The word “Chincoteague” (pronounced “shing·kuh·teeg”) is said to be an Indian name meaning “beautiful land across the water.” It certainly lives up to its name. The barrier island’s beaches are magnificent for relaxing, shelling, swimming, and viewing nature in all its glory—especially the wild ponies. Then, of course, there is the charming town of Chincoteague itself. Situated a short distance inland, visitors love to browse the fun shops and artists’ studios and indulge in a variety of fantastic eateries. With several nice lodging options, it’s also the most convenient place to stay overnight if you plan an extended trip to see the wild ponies.

How did the Chincoteague Ponies get to the island?

Even though they’ve inhabited the island for hundreds of years, no one knows for sure how the ponies got to Assateague. However, evidence shows that they’re likely descendants of horses who survived Spanish galleon shipwrecks off the coast. Another theory is that the ponies were brought to the island in the late 17th century by mainland owners attempting to avoid livestock taxes. Either way, the beautiful wild ponies continue to survive and thrive on the island to this day.

Where do the Chincoteague Ponies roam?

Two herds of wild ponies make their home on Assateague Island. Separated by a fence at the Maryland-Virginia line, the Maryland herd on the north side is free to roam and managed by the National Park Service. The Virginia herd on the south side is owned and managed by the Chincoteague Volunteer Fire Company. On the Virginia side, the ponies are fenced in two large areas. About 50 ponies are on the island’s southern tip and are known as the “southern herd.” Approximately 100 ponies are located further north and are known as the “northern herd.”

What is Pony Penning?

Several visitors first learned about the wild ponies from Marguerite Henry’s famous children’s novel, Misty of Chincoteague. The story takes place during the traditional Chincoteague festival called “Pony Penning” and was inspired by the real-life story of a local family’s efforts to raise a filly born from one of the island’s wild horses.

Pony Penning is not fiction. It’s a very real, nearly 100-year-old event in Chincoteague. It draws tens of thousands of visitors annually on the last Wednesday in July, as it’s an incredible sight to behold. “Saltwater Cowboys” herd the Virginia ponies to swim across the Assateague Channel to Chincoteague Island. Already excellent swimmers, the herd traverses the channel during a “slack tide” so that they don’t have to fight water currents. It’s free to watch the powerful ponies swim, and charter boats and kayaks offer prime viewing. But no matter how you watch on that famed Wednesday, be sure to secure your spots early.

How can I see wild ponies on Assateague Island?

Outside of the Pony Penning event, you can go to Assateague Island to see the wild ponies anytime you wish. However, many say that the best time to view them is from late April through mid-October. Keep in mind that the ponies are always on the move, so there’s no guarantee that you’ll spot them—but most people do. Many encounter them while walking, biking, kayaking, canoeing, and boating around the island.

Try Life of the Marsh Trail, Life of the Forest Trail, or Pony Overlook off the Woodland Trail for the best viewing opportunities. Be sure to bring a good pair of binoculars with you to easily view them from afar. Also, if you’re visiting anytime from May through November, you will want mosquito repellent so you can hold still while watching them.

Remember that the ponies are wild animals, so please view them from at least 50 feet away. Never approach or feed them. Stallions and mares may sometimes act aggressive, especially if their foals are nearby. The Chincoteague Fire Department says, “Love them from a distance.”

How do I get to Assateague Island?

Some say that Virginia is the optimal side to visit, especially toward the end of summer since there are nearly 70 newborn foals during that time of year. There is the iconic Assateague Lighthouse and lots of great trails to explore at the National Wildlife Refuge. Plus, it’s an easy and convenient trip to Assateague Island if you stay overnight in the quaint town of Chincoteague.

Ready to see the wild ponies for yourself? Whether you’re a resident or a resort guest, the great thing about living in Bay Creek is that you’re never far from a fantastic adventure. The Virginia entrance to Assateague is only an hour-and-a-half drive away, giving you ample opportunity to experience the wondrous charm of the wild ponies whenever you wish. Don’t wait — start discovering the magic of Virginia’s Cape today.

Enjoy our LookBook and learn more about Bay Creek. 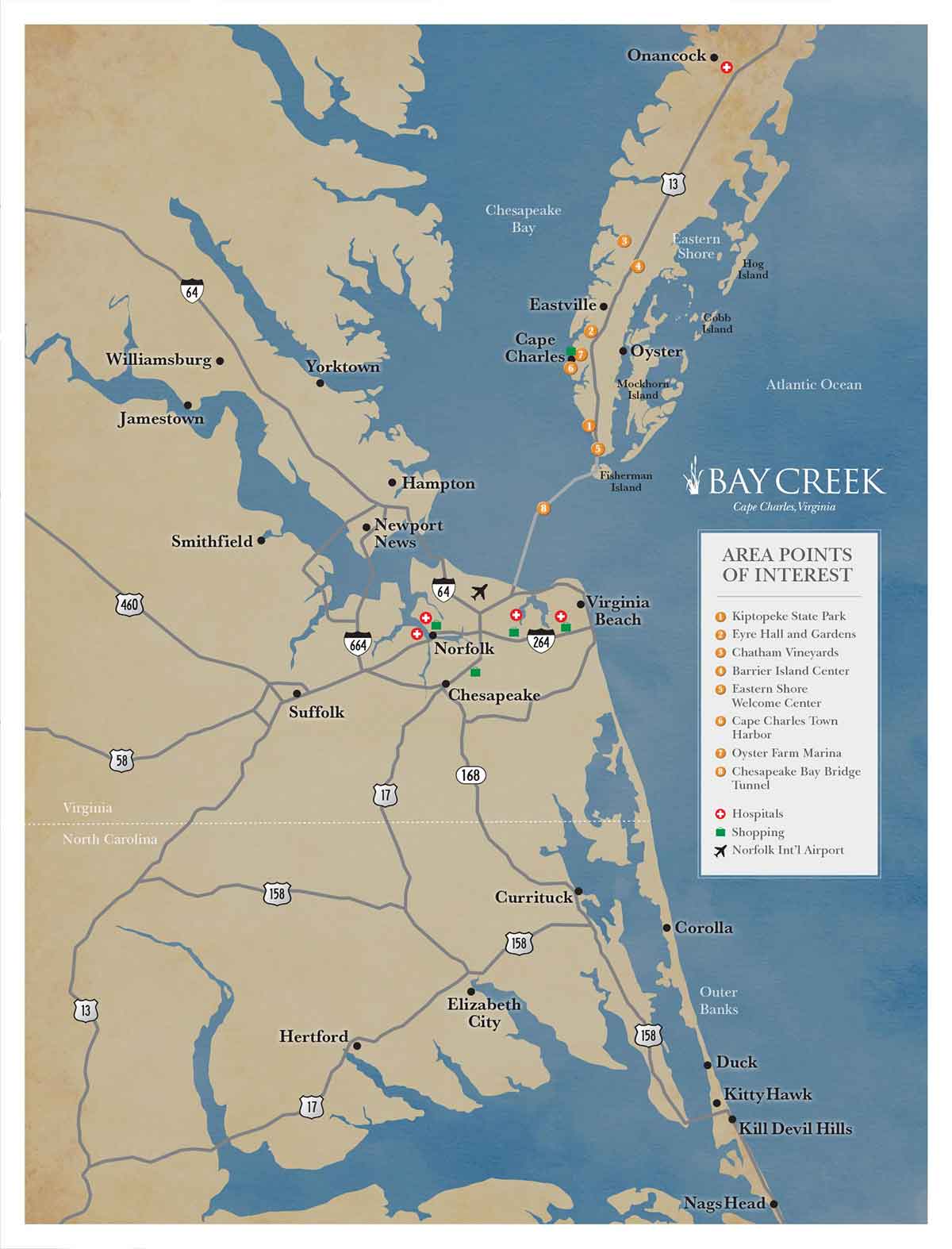